Google Still Loves Wikipedia (More Than Its Own Properties)

In late July, we saw reports that Wikipedia had seen large drops in traffic. This led some to speculate that this Wikipedia Google traffic loss was because Google was favoring its own properties more, at the expense of Wikipedia.
In today’s post, I am going to reveal findings about Google’s results using four different snapshots of rankings data. Here is what the data will show:

Want quick and easy ways to view and share the results of this study? Jump to the bottom for video and slide deck versions!

Of all the URLs we looked at, nearly 7% of them were from Wikipedia (sometimes more than once per SERP). Looking at it another way, Wikipedia shows up in the top 10 of the search results more than 50% of the time. In fact, it seemed to show up in commercial queries (7.33% of all URLs) more often than it did for the informational queries (6.29% in the Perficient Digital data from the week of August 24th).
The bulk of the Wikipedia traffic loss appears to be driven by rankings drops, as Wikipedia’s overall representation in the SERPs changes only slightly, but the site did lose many of its #1 and #2 ranking positions.
This prevalence of Wikipedia exceeds the level at which Google shows its own properties, especially in commercial queries where Google properties represent only about 2.3% of the URLs we examined. Read on for more details!

In August of this year, Moz published its latest Ranking Factors Study. I wrote a preview of this on the Moz blog, comparing data from 165,177 search results from the queries Moz monitors with 182,340 search results from queries we monitor at Perficient Digital (Perficient Digital). These results represent the top 10 listings for more than 34,000 total queries.
The Moz data focuses on commercial queries, and our data focuses on informational queries. The article I wrote on Moz focused on the differences in mobile friendliness and HTTPS adoption. Today, I am publishing data on the prevalence of Wikipedia and Google properties in the results.
We have 3 different snapshots for the Perficient Digital data over the following weeks:

We have one SERP snapshot from Moz, which is focused on commercial queries. The Perficient Digital snapshots are focused on informational queries.

I took all of the 347,517 URLs and ran them through a program to see how many of them were from Wikipedia. Here are the raw results from that process: 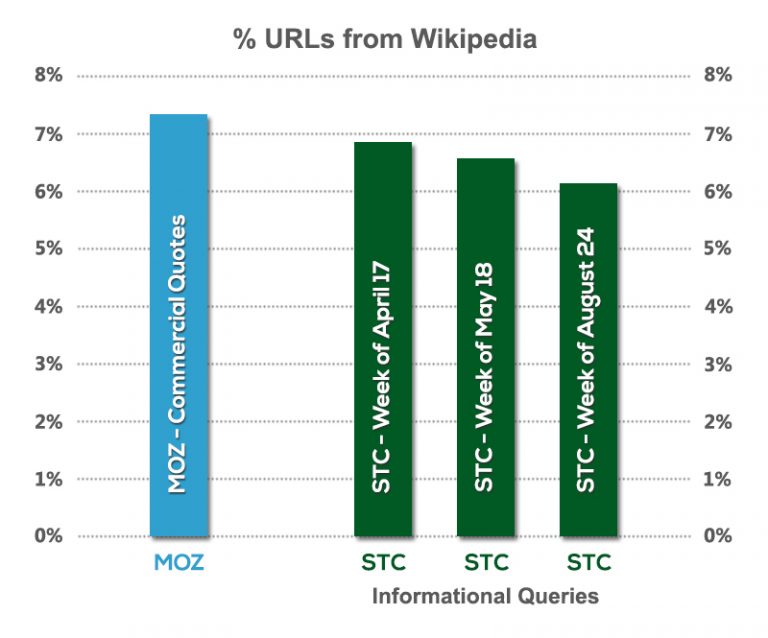 Rankings drops or not, to me, that was a stunning level of penetration by Wikipedia. Interestingly enough, the results from commercial queries (from the Moz data) showed even more Wikipedia URLs than the results from informational queries (from the Perficient Digital data).
[Tweet “Surprisingly, Wikipedia may show up in Google more for commercial than informational queries.”]
What Percentage of Total SERPS Does Wikipedia Show Up For?
I also took a look at whether or not Wikipedia was showing up more than once per query. The first cut at that data was to measure what percentage of queries showed at least one Wikipedia page in the top 10: 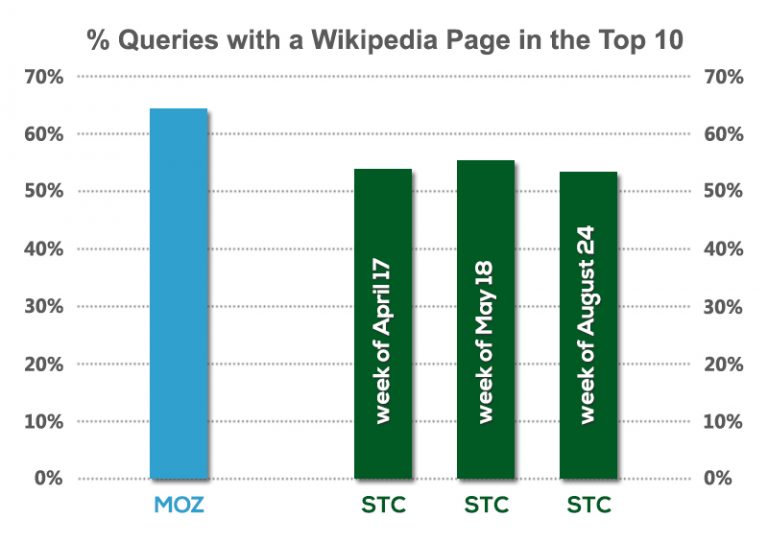 It’s fascinating to see that the commercial (Moz) queries rank Wikipedia pages more often than the informational ones do. As for the reported drop in Wikipedia presence, you can’t really see much evidence of it through this method of viewing the data.
How High Do the Wikipedia Pages Rank?
To dig a little deeper, I also took a cut at the percentages of the Wikipedia results by ranking positions. For each SERP with a Wikipedia page, here are the percentages of those that rank in the top 10 spots: 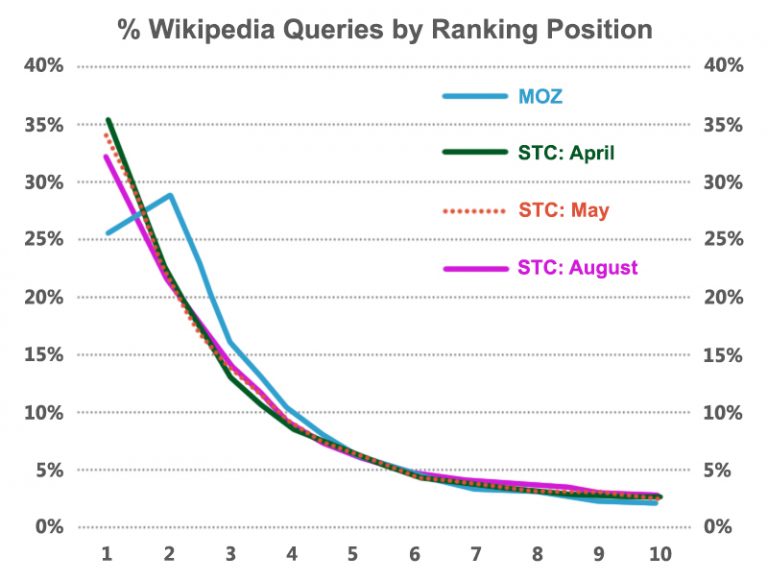 This view shows us the reason for the Wikipedia traffic loss: an overall drop in rankings for Wikipedia pages. To spot this, look at the three top lines in the chart for positions 1 and 2, and you will see that there is a gap between the April Perficient Digital data and the August Perficient Digital data.
[Tweet “Study shows Wikipedia’s loss of Google traffic caused by ranking drops.”]

In our examination of all this data, one other company appeared to perform amazingly well, too … Google. However, it was not quite as strong in SERP dominance as Wikipedia. Here it is summarized: 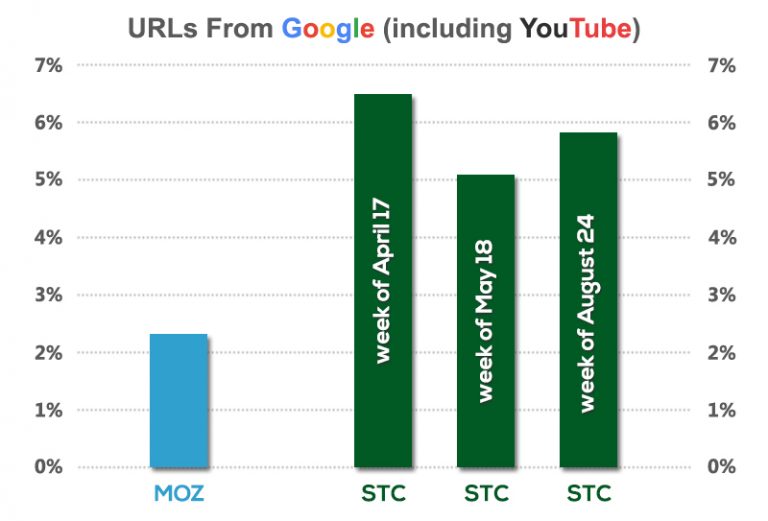 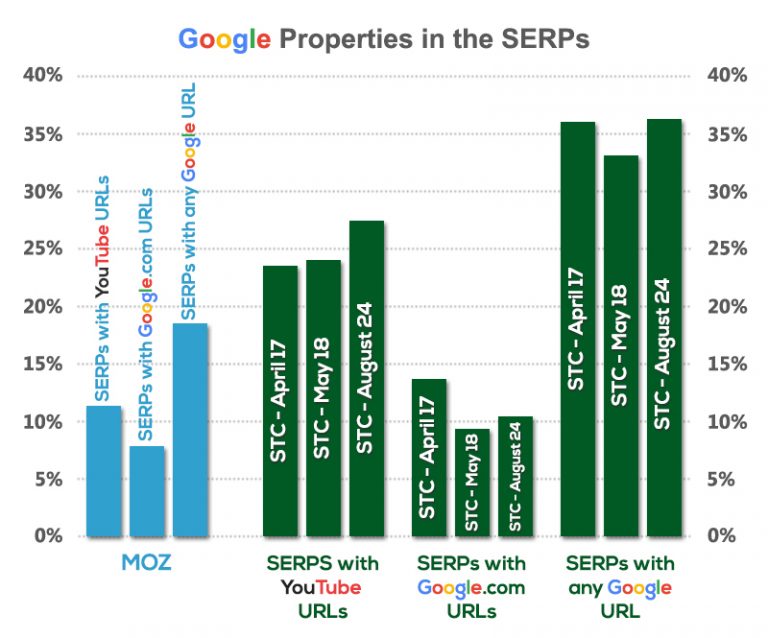 The largest difference by far (percentage-wise) is with the Google Books URLs, which were nearly absent in the commercial queries (three instances found), but show up in 1.54% of informational queries (2,846 instances). YouTube penetration in the results also varies pretty significantly with 1.42% of the commercial results (2,351 instances) to 3.95% of the informational results (7,294 instances).
[Tweet “Despite recent ranking losses, Wikipedia still shows in more Google results than Google properties do.”]

The Google SERPs are ever-changing, as Google constantly tweaks its algorithm. You can see that quite clearly from the above data. That said, we can conclude the following:

Thoughts on “Google Still Loves Wikipedia (More Than Its Own Properties)”