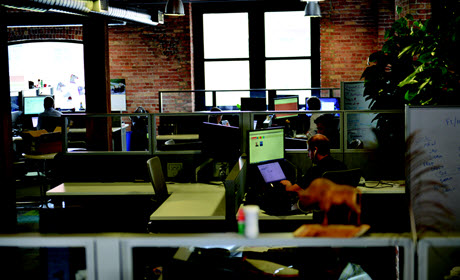 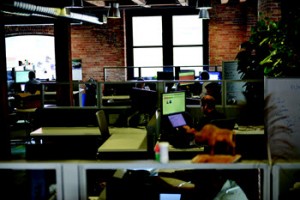 One hundred years ago, the poet Carl Sandburg declared Chicago the “City of the Big Shoulders” in praise of its industry, its drive, and its work ethic. In doing so, he articulated the can-do spirit of a city that grew from swampy transit hub to world-class metropolis in less than a century.
That same spirit infuses Perficient’s stylish and spacious Chicago office at 217 North Jefferson, a short walk from the fork of the Chicago River in the Fulton Market business district, once home to the city’s sprawling meat-packing houses.
Surrounding the Chicago office is an eclectic neighborhood dotted with hipster hangouts, specialty donut vendors, trendy restaurants, old-school Chicago meat and butcher shops, and tech companies. The office itself occupies a building that once housed the Schwinn Bicycle Co. 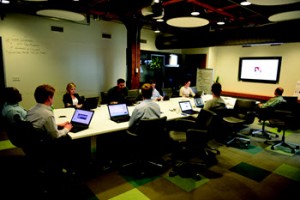 The open floorplan in the Chicago workspace encourages collaboration and communication, giving Perficient colleagues a chance to share ideas and discuss projects.
To help the team unwind and recharge, the office conducts monthly office meetings over food and drinks during which colleagues can discuss office updates and company news. These relaxed gettogethers allow colleagues to celebrate work anniversaries, introduce new hires, announce promotions, and recognize outstanding contributions by peers.
Outside of work, the Chicago office urges participation in social gatherings and charity engagements. Among the civic events in which Perficient colleagues have taken part were the Chase Corporate Challenge, a 3.5-mile run through downtown Chicago to benefit people and communities affected by violence and poverty; and the Chicago Cares Serv-a-thon, a citywide day of service that brings together thousands of people to work on community projects throughout the city.
See Also: Perficient Team Tackles Chicago’s Biggest Stair Climb for Good Cause
This unique combination of hard work, an active after-work culture, and community involvement gives Perficient’s Chicago location a distinctively “Chicago” flavor and makes the office an exciting and engaging place to work.
Get a look inside Perficient’s Chicago office:

You can also view the slideshow here.
Does your career search include Chicago? Visit www.perficient.com/careers to learn more and browse current job openings.