I recently read an article about cell phone usage that summarized where American adults are using their smartphones most often, and how it’s affecting their day-to-day personal interactions. This information was astonishing and saddening all at the same time, reflecting these eye opening statistics: 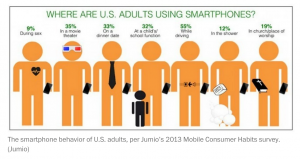 I will be the first to admit that I myself have a hard time putting down my phone at the movie theatre or when I’m out to lunch, but I’ve come to realize that it’s completely disrupting the way people interact with each other “in real life” or without a cell phone present. People make significantly less face-to-face contact and are not as engaged in the conversation as they would be without a cell phone nearby. I feel that if I’m speaking with someone while they are scrolling through Facebook or checking their email, they aren’t listening as well or as engaged in the conversation. It almost feels as though nowadays, people don’t know how to engage in a conversation without their “security blanket” i.e. smartphone in their hand or their pocket; they need something to look down at if they don’t know how to respond.
This just as easily translates into the work environment. Everyone has their cell phone in hand, ready to answer a call or respond to an email. When giving a presentation, how many people are on their cell phones while “listening” to the presentation. “Even without active use, the presence of mobile technologies has the potential to divert individuals from face-to-face exchanges, thereby undermining the character and depth of these connections,” reads a study from researchers at Virginia Tech.
In addition, Forbes recently interviewed Molly Ringwald about “The Breakfast Club” 30 years later showing. When Forbes asked what the movie would look like if it was made in 2015, her response was, “No one would have talked. We would have all just been sitting there with our phones texting our friends.”
For Valentine’s Day I went out to a nice restaurant in New York City with my boyfriend, dad, and step mom. We didn’t even make it to the appetizers before my stepmom was “checking in” on Facebook and my dad was tracking my younger brother and sister via a family-tracking app called Life360 on his iPhone. This brings up my second point; while cell phones can get in the way of daily social interactions and important dinner meal conversations, they also bring a sense of comfort and security to the engagement. While my younger brother and sister are old enough to be left alone, they often walk from Starbucks, to a friend’s house, to a pizza place, to another friend’s house, and back to the local ice cream shop, which can be worrisome to most parents. By having Life360 readily available on their phone, my parents are less stressed about leaving the house for a long period of time, and are more apt to be engaged in the dinner conversation. My dad may check the app a few times to see their whereabouts, however, he doesn’t have to call them, leave a voicemail, worry about them lying about their location, or even spend time texting them back and forth while at the dinner table.
So, what is your perception on how cell phone usage is affecting the way you interact with your peers?