At ClickZ Live New York, Playboy’s Robin Zucker spoke about “Getting Real With Native: Making Branded Content Programs Work.” Her session focused on how to create high-quality branded authentic content that serves the need of promoting a brand — without having any advertising or promotional component to it at all.
Robin is Senior Vice President of Marketing, Digital Media for Playboy. I spoke with Robin about how she views the role of branded content. Playboy uses content campaigns to help brands get exposure to the Playboy audience, including their audience of more than 28 million fans across social media. In today’s post, I extract the key points from that conversation.

How the Marketing World Has Changed

The first thing that leapt out to me during my chats with Robin is how much the marketing environment has changed over the years. For traditional marketers, the notion of promotion without self-promoting is a confusing one. Traditional advertisers are used to broadcasting in-your-face self-promotional messages in all of their campaigns. It’s just the way it was done 10 (or even five) years ago. But the new media world has changed all of that.
The reason for this change is that the consumer has nearly limitless choices available to them for entertainment. Get too commercial with them, and they’re gone. They don’t need to put up with your messaging if they don’t like it. The social platforms allow for a dialogue and feedback – so the content that gets shared needs to be authentic, and content. Or it won’t have an impact.
This is clear to most of us who are active in the digital marketing world, but how does this scale when you bring it to the level of tens of millions of people and big-time business? The reality is that it scales very well indeed.

Playboy teamed up with Red Bull on a promotion that involved a video shoot of stunt cyclist Danny MacAskill riding the Playboy Mansion grounds. The video was released on the Red Bull YouTube channel and has been viewed over 2.6M times. 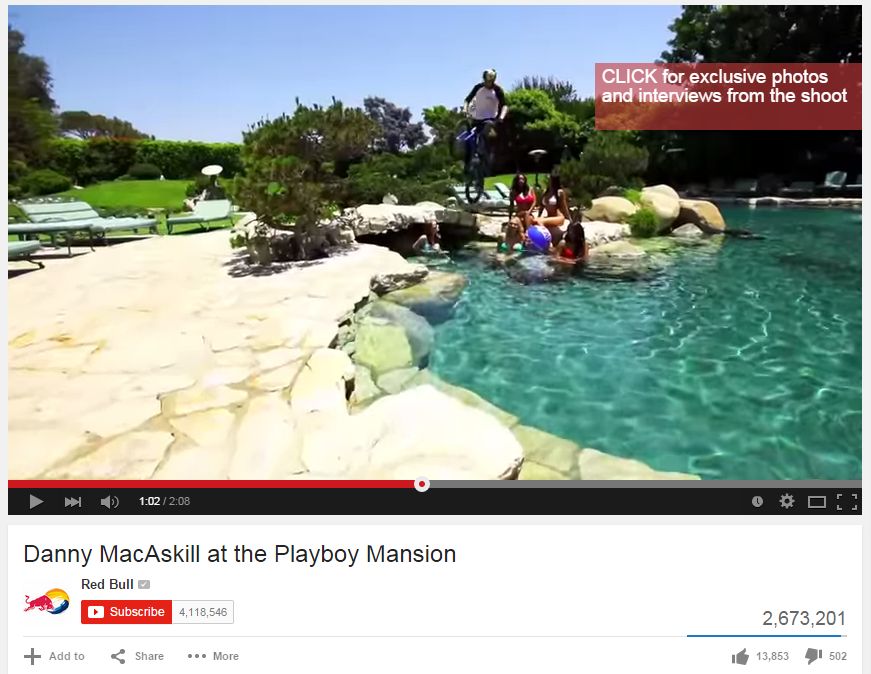 There are many elements that make this video promotion work:

Stoli and the Moscow Mule

Playboy runs a lot of promotions with Stolichnaya Vodka (“Stoli”). For example, they brought in mixologist Eric Bugosh (of The Spare Room in Hollywood) to show how to make the Moscow Mule cocktail, with the assistance of Playmate Kim Phillips. The Facebook video for this received over 190K views.

It’s a simple 1:50 minute long video that focuses solely on the making of the drink. What makes this work? The major elements are similar to those that made the Red Bull work — Danny MacAskill video work:

Robin emphasized that the key to good measurement starts with establishing the right key performance indicators (KPIs). For example, is the goal simply video views? Is it clicks? Email sign-ups? You will note that in the Red Bull screenshot at the top right, there is a text box that says, “CLICK for exclusive photos and interviews from the shoot.” There are several of these in the video, and clicks on those are actions that were an important part of the KPIs for that campaign.
There are other types of actions worth measuring, too. For example, in a recent promotion Playboy did together with Unfinished Business, one of the most popular comments was someone saying, “I could watch this over and over again.” These types of engagement are great, too, and you can do sentiment mining in all the related comments to see how the overall message is being received.
This is great for the marketer of the movie, because to the consumer, that wasn’t an ad. And it wasn’t because we treated it like content, but that content was the message of “This movie is opening, this movie is happening, you should go see it!”, without ever actually having to go say that in a direct manner.

What Lessons Can We Learn From These Promotions?

For the two examples provided above, you can see a clear commonality in what made the messaging work. Both pieces were authentic, straightforward content that was relevant to the Playboy audience. The Red Bull promotion leveraged two very large audiences to great impact.
Ultimately, here are the key factors:

These are concepts that apply to nearly any brand, be it large or small!

Thoughts on “The Power of Brand Collaboration in Content Marketing”