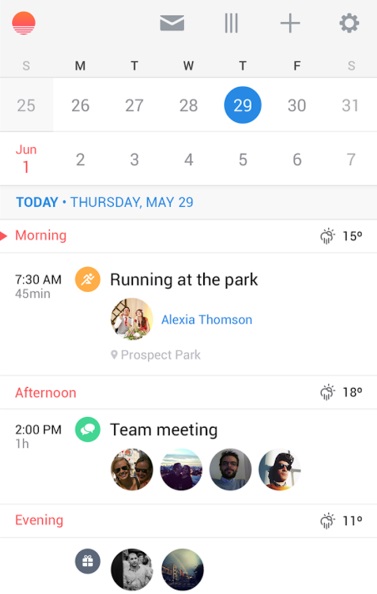 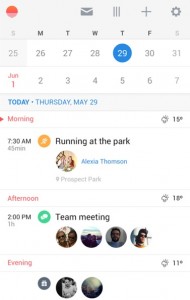 Microsoft is continuing its cross-platform productivity applications push. For a long time Microsoft was developing applications only for its own operating system (Windows) with an exception of MacOS/OSX (which was likely due to monopoly accusations) . But recently things are changing in a big way. Microsoft could no longer ignore extremely popular mobile OSes like Android and iOS, or it was risking to lose a market share in productivity applications where it was an undisputed leader for decades. Recently, Microsoft released a number of its popular applications for iOS and Android, including Office, OneDrive, OneNote, etc.
However, sometimes it makes more business sense to buy a best-of-the-breed application and re-release it under its own branding than to build something from scratch in-house.  That was the case with another recent Microsoft’s acquisition – Acompli email app which Microsoft recently re-released as Outlook application.
Sunrise Calendar is a very popular calendar application for iOS and Android. Yesterday Microsoft announced that it’s acquiring Sunrise Calendar for more than $100 millions. Sunrise Calendar is a beautifully designed mobile calendar application which integrates with Exchange, Google and iCloud and also can connect to other third-party applications like SongKick and TripIt!.
My prediction is that Microsoft is going to keep Sunrise Calendar as a separate application (maybe renamed into Microsoft Calendar) and also may integrate it’s technology into mobile Office and Outlook applications (new Microsoft Outlook for iOS/Android also have a calendar view, but it’s not as advanced as Sunrise).