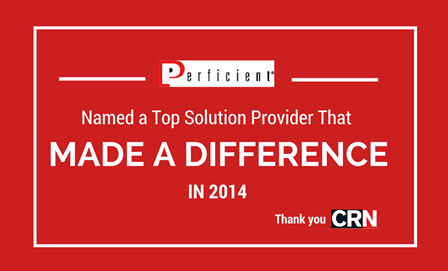 We are excited to announce that Perficient has landed among CRN’s list of 10 Solution Providers That Made A Difference In 2014.
CRN’s article highlights Perficient’s community partnership with the St. Louis Rams NFL football team and our company’s work alongside the civic-minded staff and team members. 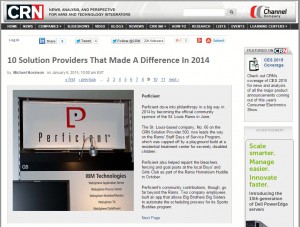 Perficient first joined the St. Louis Rams at the Marygrove Child Center in June for the team’s sixth annual playground build. In just less than 9 hours, volunteers installed a state-of-the-art playground facility, designed a mural, painted on-campus cottages and tidied up the grounds. The Florissant, Missouri-based center offers housing, counseling and mental health services to underprivileged youth, and the appreciative staff told volunteers that the enhancements had been needed for some time.
Perficient teamed up with the Rams on a second initiative in October at Mathews-Dickey Boys’ & Girls’ Club for the NFL and United Way’s annual Hometown Huddle. In honor of the league-wide day of service, volunteers repainted bleachers, fencing and goal posts. Mathews-Dickey representatives said the organization relies heavily on volunteers and that the enhancements to the field would give the young players a complex in which they could take pride.
The article also highlights a project by two Perficient colleagues for Big Brothers Big Sisters. The colleagues donated their time and joined developers of all ages to create a Sports Buddies App for the organization through Hack4Colorado. The event is part of a series located all over the country that encourages technical professionals to pool their talents to create much-needed digital tools for nonprofit organizations.
It’s projects like these that get to the heart of Perficient’s commitment to investing time and resources back into the community.
Read more about how Perficient colleagues are making a difference in the Individual Impact section of our Life at Perficient blog.