The Microsoft Power BI blog announced last Thursday that new features were now in Preview, and I can tell you that this is news worth seeing.
Among the highlights this preview includes are:
Power BI Dashboards  –  This configuration of the base visual approach in Power View into a coherent Dashboard interface is a smart move.   The visual mode is crisp with flat designs and color coordination — again echoing Power View.  With the increased number of available visualizations, there is even more of an opportunity to render a dashboard unintelligible.  But that’s more in the hands of the designer.  Kudos to Microsoft for filling in this gap in the 1.0 version of Power BI. 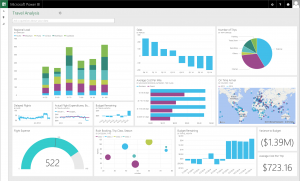 SaaS Connectors  – Handy for many will be these out-of-the-box connection widgets to cloud-based vendors like SalesForce, Zendesk, Dynamics CRM Online, and more.  What’s more, prebuilt dashboards are supplied for each connector.  Clearly this is potentially a huge time-saver for users of those apps, and a true response to a marketplace that is demanding more app-style pre-configured experiences.
Power BI Designer  – In an interesting move, Power BI will be extended to customers without Excel 2013 via the Power BI Designer.  An online tool, it will provide for the authoring and publishing of Power BI reports to the cloud service.  I think this is a good move, taking the Power BI brand a step away from Excel only, but still keeping it squarely in the cloud.
Live connection to on-premises Analysis Services instances  – The ability to connect to on-premises Analysis Services from Power BI is a feature that actually just went live.  Nonetheless, it’s worth crowing about in this update as it was a sorely missing feature from the initial release.  That said, the addition of the functionality now comes at a pivotal time alongside Power BI Dashboards.
Power BI Native Mobile Apps  – We’ve been hearing about it from the beginning, but now it looks to be coming true: a Power BI for iOS app is now available. The Power BI iPad app went live in the Apple App Store last week.  Other platforms are promised in coming months (hopefully including us shoemaker’s children Windows Phone users….)

These features are in preview as of Thursday, December 18.  If you already have a Power BI License, you might be eligible to check out the new features.  Click through to the blog post referenced up top to get started.
And if you DON’T have access yet, another wave of preview access is coming in mid-January, so stay tuned!