My Experience Taking a Microsoft Certification Exam …At Home 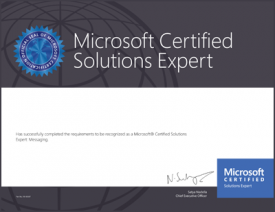 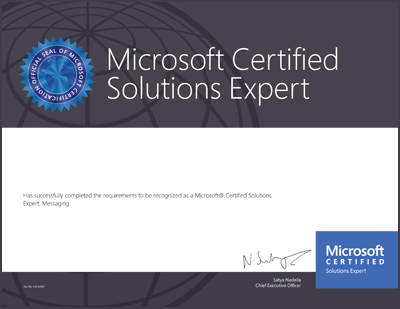 As an IT consultant, taking certification exams is a necessary task that most of us are quite familiar with. You can debate the value of the certifications or the ability of an exam to properly assess your knowledge on a topic but at the end of the day, it’s something you generally need to do as part of your job. While I don’t place as much importance on certifications as I did in the 1990s, I still try to keep my certifications current for my own personal benefit as well as the benefit of my employer.
This past September, I received an email from Microsoft announcing a new “Online Proctored” offering for some certification exams. Exams you can take at home? Really? The email had my interest on a couple levels. Seeing as some exams that were on my “to do list” were being offered through the Online Proctored option, I knew I had to give it a try.

I live in a somewhat rural area, centered between a few larger cities. Trying to schedule an exam can be difficult and generally causes me to miss nearly a full day of work. The Prometric testing centers nearby have always had limited availability and require you to schedule a couple weeks in advance in order to find an opening. Microsoft is in the process of switching from Prometric over to Pearson VUE which I hope will alleviate some of this burden but the closest testing center is still at least 30 minutes away and some of the VUE centers are the same locations as the Prometric centers. Taking an exam in my home office had the potential to save me a significant amount of time.
Aside from the benefit of time saved, testing is interesting to me. That probably sounds odd to many people and I’m really not sure why I’m so fascinated by it but the process of exam delivery is something I find interesting. The only thing I can really point to is that several years ago, when CompTIA first released their “Server+” exam, I had the opportunity to participate as a Subject Matter Expert for two weeks and assist with the exam development. In addition to meeting interesting people from around the globe, I was able to work with “testing experts” that would explain to you why a question was good or poorly written. I found it amazing how someone with no technical knowledge on the topic was able to determine the correct answer based on things such as the detail in the answer options. It was a great experience and I feel like some of the concepts I learned during those sessions probably made me a better test taker in both my academic and professional life. Not having taken an exam at home before, I was curious how the process worked.

The first thing I noticed is that I could schedule an exam the same day and take it almost immediately depending on the openings. While the initial email said exams would be available 10:00 AM – 10:00 PM EST, it seemed like it’s more like 10:00 AM – 4:00 PM; this is still an improvement as the latest appointment in most nearby testing centers is 1:00 PM. What also stood out was I could also take them on Saturdays which is rare for the testing centers near me. I decided to schedule an exam for 4:00 PM which only resulted in one hour of lost productivity at work and meant I would probably be done by dinner time.
Also interesting was it seemed like I could reschedule the exam up to 30 minutes prior. I haven’t dug into the details much but I know the last time I tried to reschedule a Prometric exam due to a work conflict, they wanted to charge a fee; so this looks like it’s probably an improvement as well.

I did a quick scan of the rules before my exam but didn’t really know what to expect. When you first start the exam, you download a small application and you’re asked to basically test your camera and microphone. You show your ID to the camera and then there is a wait of about 5 – 20 minutes; that waiting period can feel like forever with the anxiety of taking an exam as you just stare at a picture of yourself on video with a flashing red “recording” at the top. The proctor then calls and goes over some of the rules and begins the process of checking the room you’re testing in by having your move your camera around the room.
I work from home 100% and while my home office isn’t terribly messy, it’s what you might expect to see from someone who is into a lot of technology and a handful of hobbies as well. I knew there were a number of things (whiteboards, multiple phones, etc) that would need to be moved beforehand and I tried to clean it up as much as possible.
Below is a picture of my desk area on a normal day: 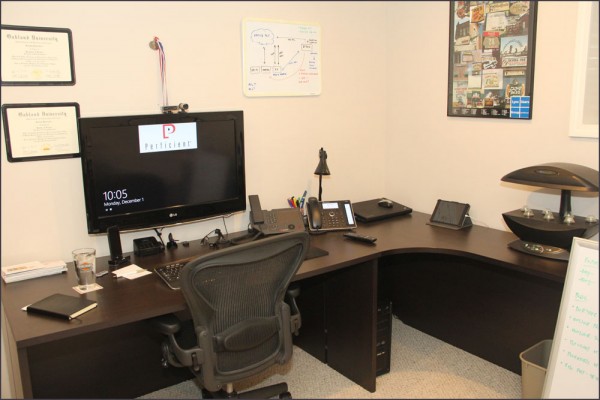 and here it is in “exam mode”: 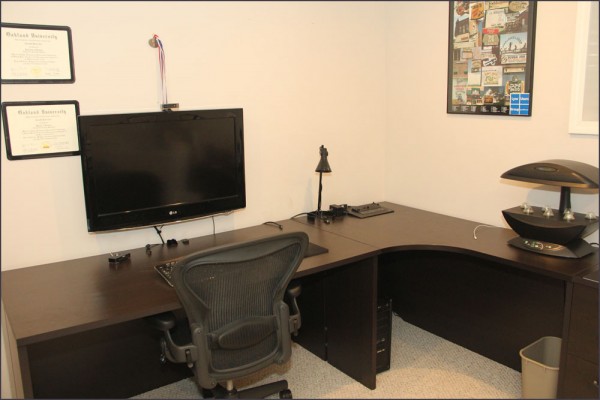 One thing this did give me the opportunity to do was dust…
The amount of time spent checking the room varied somewhat between the exams I took. Expect to do things like empty your pockets, show your arms and ears up close (all things stated in the rules) and possibly use the camera to show items on your walls up close (I had to zoom in and show my diplomas). Basically if something was within reach from my chair, I was asked to move it further away. For the most part, it was all pretty non-intrusive and probably more thorough than a testing center where they ask if your pockets are empty but no one actually checks.

Once the test started, it was largely similar to the normal testing experience. One difference was at the top of the screen, I could see the video that I assume the proctor was seeing. I’m not sure why but it’s a little distracting seeing yourself on camera even though it’s only about 1 inch square; eventually I learned to ignore it.
One thing that I missed is that you’re not allowed any paper to take notes like you normally have at a testing center. I didn’t particularly need it for the exams I took but I know at times I’ve used the supplied whiteboard pretty heavily with some exams. I’m not sure how but this might be something needing addressing.

Twice during my first exam, I received a little popup from my proctor. The first time, I was apparently reading some of the questions aloud which is not permitted. I didn’t even know I was doing it but it was just a brief “please do not do it again or we will end the exam” warning. The second time, I had my head/face tilted down and out of view of the camera. Neither were a big deal but it made me aware that you’re being watched fairly closely.

Some of the cheating that goes on with certification exams is largely why I don’t place as much value on them than in past years. When Microsoft still offered the Microsoft Certified Master (MCM) program, you knew that people that went through that process achieved it on their own merit. Today, I think we’re all aware of the “Paper MCSE” that has either no real experience or has passed exams through the use of various unethical means. I try to not let this discourage me from continuing to take exams but it would be nice to know that something you accomplish cannot also be accomplished by others that are cheating.
That said, will the “Online Proctored” process make cheating any easier? I don’t have any inside information to say what is being monitored or what technology is being used to detect cheating. Part of mitigating any cheating is probably keeping the detection process a bit secretive. I feel like I was probably more closely watched than I would have been at a testing center. I can only assume that the proctor sees your screen and it would be very noticeable from the camera if you’re somehow typing away in a search engine when you’re staring at a multiple choice question. Just watching someone’s eyes probably gives you a lot of insight as to whether they’re up to something.
Reading the comments on a few blog posts about the Online Proctored process, everyone seems to have their grand ideas on how someone could “easily cheat” during an exam. I’d say most of these things are probably not something I see someone doing during the exam without getting caught. Cheating during the exam is probably less of a concern to me than the exam questions being compromised somehow and becoming available word-by-word on the Internet. I can certainly think of a few different ways that someone might try to record the exam material, hopefully the exam software counteracts or detects some of these. It would also be nice to see Microsoft mitigate this with larger question pools or variations in the answers.

Overall, I was really pleased with the Online Proctored process; I’ve now used the process twice and highly recommend it. It saved me quite a bit of time and offered a lot more flexibility when it comes to scheduling. The process was a bit of added stress at first as it was a deviation from what I’ve done for the past 20 years and even though I wasn’t intentionally doing anything wrong, I still felt guilty and was trying to be extra conscious of everything I was doing. Once I got past that, I was incredibly happy that I could take an exam in about two hours with minimal advanced notice. It’s encouraging to see Microsoft applying new testing methods to the certification process and I look forward to seeing how certification exams evolve in the future.

Thoughts on “My Experience Taking a Microsoft Certification Exam …At Home”