On August 28, 2014, Google’s John Mueller announced the end of the Authorship markup program (also known as rel=author markup). In today’s post I will:

To learn more about the history of Google’s Authorship program and details behind its ending, see this article co-authored by Mark Traphagen and myself on Search Engine Land.

We examined 150 top media sites, with a focus on some of the most well-known news and/or blog sites in the world. Across these sites, we also looked and mapped out the behavior of 520 different authors who write regularly for these sites. The purpose of this exercise was to evaluate in detail whether or not the publishers and the authors were attempting to participate in the Authorship markup program, and if they were, did they implement their tagging correctly.
For publishers, we looked for the following:

For purposes of this post, the 3 link method, the 2 link method, and the email method were simply ways to implement Authorship markup. How to implement them is not important, though if you want to see the details of how these worked, read this interview I did with Google’s Sagar Kamdar here.
Here is the data for the 150 sites we reviewed: 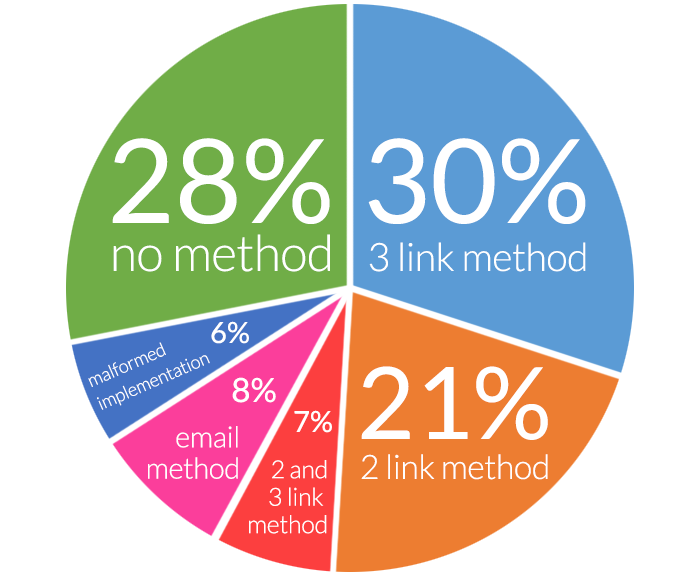 This data suggests that 72% of sites attempted to implement markup. Here are some other slices at the data:

One of the more interesting aspects of the data is that there were 7 sites that attempted no markup for which Google showed Authorship snippets in the SERPs anyway.
For authors, we looked at whether or not they had a Google+ profile, and if they did, whether or not they implemented a link there to the site where they were publishing.
We sampled 500 authors across 150 different major media web sites. Here is a summary of what we saw for their implementation of authorship tagging in their Google+ profiles:

The net is that 71% of the authors we reviewed on highly prominent sites where not trying to implement their side or Authorship markup (a link from their Google+ profile to the sites where they publish content).

Is This Why Google Killed the Authorship Markup Program?

In short, this is part of the reason for ending the program. In his announcement post, Mueller said the following:

We realize authorship wasn’t always easy to implement, and we greatly appreciate the effort you put into continually improving your sites for your users.

In addition, in a conversation with Mark Traphagen on the day before this announcement, Mueller told Mark that one of the reasons for this is that the perceived end user benefits were not worth the expense of the server resources used to process that markup.
Of course, the fact that adoption was poor, and errors were rampant were very much part of the problem. Google’s desire to support this program was so strong that they figured out how to show authorship for 7 sites that did not even attempt to support it. In addition, Google dealt with many of the flawed implementations and still showed Authorship snippets as well. These efforts only increased the expense required by Google to support the program.

Impact on Future Markup Programs Such as Schema

So is this the end of all markup support by Google, or will that come sometime soon? Not at all. In fact, Mueller addresses this in his announcement:

Going forward, we’re strongly committed to continuing and expanding our support of structured markup (such as schema.org). This markup helps all search engines better understand the content and context of pages on the web, and we’ll continue to use it to show rich snippets in search results.

One of the problems that plagued Authorship markup is that it required a bit of a handshake between the publisher and the author. Both parties needed to do the right thing for it to work. Most Schema only requires the publisher to get the markup right on a page by page basis.
In addition, Google was not seeing enough end-user benefit. Yes, many will tell you that Google canceled the program due to lost AdWords revenue. The reasoning many people use about the CTR on AdWords is fundamentally flawed. Of course, Google knew that putting up author photos might impact AdWords CTR before they did it, yet they did it anyway.
It certainly did not take them 3 years of real-world data to figure that out. Google was willing to risk some revenue to support the program if the benefit to overall search quality was high enough. They proved that statement simply by releasing the authorship program to the world in the first place, and leaving it in place for as long as they did.
Remember, for Google search quality and user experience does ultimately affect the bottom line. If people stop liking the results they get on Google, they will stop using them, and never see those ads.

The study we performed does confirm that (as Mueller said): “authorship wasn’t always easy to implement”. People weren’t doing it, or they weren’t doing it correctly. Google’s policy of not promoting these initiatives in any way did not help either. Of course, other factors came into play as well, such as the possibility that some major publishers might have decided that authorship markup just wasn’t worth it for them.”
Will the concept of Authorship go away? Of course, not. Google is still interested in authors as entities. Will you see author related markup in the search results in the future? Probably not, as Google has already told us that they did not enough benefit to adding those to the search results. If you do, it will only be associated with “cream of the crop” authors. In my opinion, this is more likely to bring material benefit to search quality.
What about AuthorRank? Is that dead? Not at all, but if and when it does come into play, it will probably do so in a way that you will never really know it. It will be one of many signals, and it may be highly tied to personalization. For Google, the more obscure their algorithms are, the better.
Free Hugs picture credit: David P Lewis via Shutterstock.com