Few things human are more fascinating than identical twins.
Think about how many creative works, from classical literature to pop culture, are about twins: The Prince & the Pauper, the myth of Castor & Pollux, the 1960s Patty Duke TV Show, The Parent Trap–the list goes on and on.
When it comes to content on the web, though, identical duplication isn’t quite so entertaining. Duplicate content within the same site can cause problems for search engines trying to decide which page should rank. But duplication can also be painful across different sites if the site that ends up ranking for an important keyword is not the one to which you wanted to drive traffic.
So, can posting your content to Google+ cause a duplicate content problem? 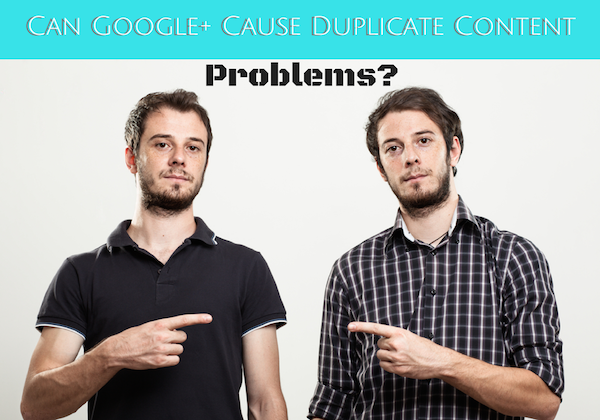 The Concern: Google+ Posts Can Rank on Google

When Google+ was first introduced early adopters like me quickly noticed a powerful phenomenon: Google search indexes public Google+ posts just like web pages, and they can rank for terms found in the posts. The factors that determine which Google+ post(s) will rank for a given term I’ve written about elsewhere.
That means that if the exact same content is published on a website and then reproduced as a publicly-shared Google+ post, that G+ post goes into competition with the site content for keywords relevant to the content.
So maybe it’s safest to never syndicate your content to Google+? No, I am very sure you don’t need to worry about that. Let me explain why.

Why Google+ Posts Do Not Pose a Duplicate Content Threat

First of all, let’s clear something up: there is no such thing as a “duplicate content penalty.” The only problem with duplicate content is that Google has to decide which copy should rank highest. And that only becomes a problem for you if the ranking copy isn’t the one you want to drive the most traffic to!Links Help
A way to help Google find the original of syndicated content (which is publishing the same content on other sites, including Google+) is to link to the original. Eric Enge has written about how to safely syndicate your content on multiple sites.
I’ve been assured by Google’s John Mueller that when a Google+ post links to a web page, Google will see the web page as the original. Google will never value a Google+ post over a web page with at least some bit of authority, but not at all if there is a clear link back to the web page.
Google+ Posts Are Relatively SEO WeakThough Google+ posts can certainly rank in Google search, their strength is relatively weak compared to most regular web sites, even from authoritative Google+ profiles. That is, if Google can find web content that is a good match for the query, they will most often give preference to that over a G+ post.
G+ posts, though, can rank high in search, but in my experience it is only when they are a much better match for the query than any website content.
I have a personal example that illustrates this. For over two years a Google+ post I wrote about “Google+ Page analytics” ranked never lower than #3 in a logged-out search for that phrase.

But then Google+ finally did introduce some analytics for Google+ pages. Immediately dozens of articles about that popped up on regular sites. And just as quickly, my Google+ post disappeared from the top pages of search. It had served its purpose, holding a place for two years as the lone best answer to a query. But when that query became headline news, it couldn’t compete.
Let’s Get Personal
There is one place where Google+ posts can be very strong and rank high frequently: in the logged-in searches of people who follow you on Google+. But even there, if you’ve linked to your original content, you’ve still only put those people one more click away from the original.In light of the last point, if you’re really concerned that your G+ posts will rob traffic from your website, don’t republish the entire content on G+. Instead, create a “teaser” post that has enough of the content to build interest, then finish with a “read more” link to the full content on your site.

Finally, simply because most of you reading this probably never saw the grooviness that was The Patty Duke Show, and since I mentioned it in my introduction (#showingmyage), I leave you with the theme song. May it become as much an earworm to you as it has been for me for some 50 years now!

Thoughts on “Can Google Plus Posts Create Duplicate Content Problems?”