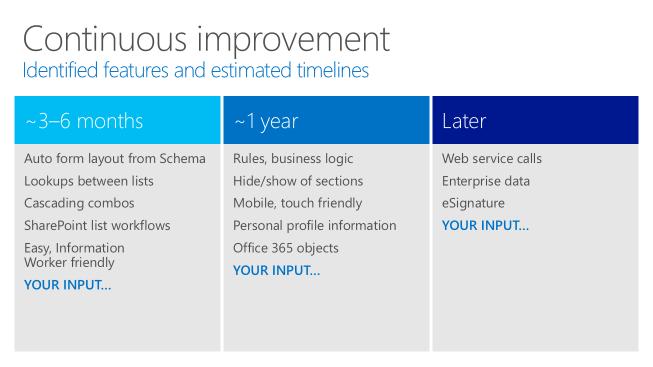 On Jan. 31, 2014, Microsoft announced the end of InfoPath Forms. This is not totally unexpected as InfoPath is an older technology that relied on programming methodologies long antiquated in a client side, HTML 5, mobile world. Since the announcement, the community has been waiting for more information from Microsoft. Some information was relayed at SPC, but nothing major. I’ve been doing some reading and have gathered the following information on what are best options are moving forward.
1. Apps – Using the new app model in SharePoint 2013 and Azure Hosted Apps, build your form using standard HTML5, jQuery, and CSOM, call your lists and libraries via REST and voila, you have a new form technology. Considering the new direction of the app model – decouple the platform (SharePoint) from the customization (App) – this shouldn’t be a big leap for your thought process.
“But what if my business users need to create forms”
Ok, admittedly, the above solution only works if you invest in development. If you want to enable business users to create forms, you’ll need another option. But let’s be honest, how many of you out there are business users actually creating forms? More often, our clients’ business users relay their requirements to a developer for building the form.
2. Excel Survey’s – this feature is only currently available in Office 365, not on premises SharePoint, but it’s a decent option for your business users. Let’s be honest about another thing here – if you were one of the few business users creating your own forms, they weren’t very complex forms. They were most likely simple information gathering forms. This option using Excel is perfect for that. I encourage you to check it out!
3. Access Apps – obviously this option is based Access Forms, the technology has changed quite a bit since even 2010, I encourage you to get up to speed with the new features and functionality, here and here. This is still very new, so we are still exploring the best ways to use the functionality. Microsoft is pushing this as an option to link a collection of lists and libraries through relationships. It’ll be interesting to follow this and see how it grows.
4. FoSL (Forms on SharePoint Lists) – this is a new feature due out mid-2014 to early 2015. It seems to replace the idea of using InfoPath to customize a form on a List/Library like we do today. How it differs remains to be seen, Microsoft has only hinted towards it at Conferences, but I can guess Workflow integration, cascading drop down lists, that sort of functionality. Stay tuned for more on this.
5. Structured Data Forms – this is another new technology Microsoft has only hinted towards. I did find this text via a CMSWire blog – “Structured data forms take things to the next level and pull together forms for display or for print. Think along the lines of a form that you want users to be able to print out and/or complete online. This was presented as an idea for the future and not a solution that currently exists. They are working with some other Office teams, specifically the Word team to help develop the best way to capture, present and build these structured forms. There needs to be a focus on the user experience as well as a plan to work with the data set from the completed forms. Microsoft made a commitment to provide a clear roadmap within the next year.”
What to do with InfoPath today?
If you have existing InfoPath Forms, they will be supported until 2023. If you are creating new forms today, I advise to use options 1-3 above. Until all the new technology is announced and any potential migration paths explained, I can’t recommend that you build a new form using InfoPath today. (even though the above blog from MSFT does encourage you to still use InfoPath)
The moral of the story here is twofold – 1. Stay tuned for more, Microsoft is listening and they are working on new technologies. 2. There are plenty of good options out there now to bridge the gap until InfoPath is retired.
See the below diagram for more Microsoft Forms Roadmap detail

If you would like to voice your input to Microsoft, do so here – http://officeforms.uservoice.com/