Are We Hunters or Are We Farmers?

This past week had two major events of note. These included Google’s banning of MyBlogGuest and assessing a manual penalty on Portent, Inc. The penalty on Portent now appears to be lifted.
What are we to make of all this? Is Google seriously turning up the heat? This is something that I predicted in my 6 SEO Predictions Post for 2014 post for Search Engine Watch.
I think that we can safely say that Google is turning up the heat. Actions by Google are an outcome of more than a decade of hunter-like mentality by SEOs. What I mean by this is that many link builders played a see target: shoot target: kill target: eat target game. Vision involved nothing more than better, faster, and more efficient ways to kill more targets. [Tweet: “Google is turning up the heat on link builders“]
The problem is that are now getting depleted of game. Google has invested enormous resources in protecting their franchise, and you can expect many more of these types of occurrences throughout 2014 and on. Here are some of the lessons we need to learn:

To Google, this ended up supporting bad link building practices by others. So regardless of Ann Smarty’s intent, Google did not like it, and they acted. [Tweet: “When cracking down on spam, Google doesn’t care about your intent“]

We need to view these two actions as significant shots across the bow, to serve notice that Google is going to be more proactive than ever in addressing link building practices of all kinds. To the best of their ability, they are going to force the conclusion they want, which is that link building with a hunter mentality is dead, and that links to your site should be a side effect of visibility and reputation building campaigns. 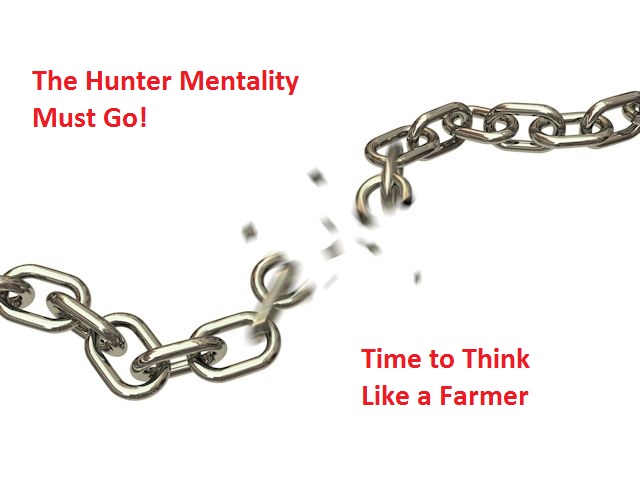 The note basically was serving notice that this client was not doing enough to clean up links, and that they needed to cut much deeper than they had been. In addition, the note suggested that dealing with reconsideration requests was demanding on Google’s time (so please stop wasting it with premature requests). [Tweet: “Google is losing patience with repeated reconsideration requests from penalized sites.”]

It is time for SEOs to abandon their hunter mentality. Historically, most SEOs learned what things worked, and they went and did lots of that. There was no attempt to look at the big picture of marketing at all. In the case of guest posting, the goal was links from as as many different domains as possible.
If you think about it, this inevitably drives you to lower and lower quality sites and/or lower and lower relevance domains over time. This is not just about guest posting, but it is about link building as a practice. Time to get real. Let’s talk about some immediate actions you should take:

I say that with some trepidation as I know a bunch of people are going to rush out there, say they are doing content marketing and they are going to screw it up. Don’t treat content marketing as same s— different day. That is not going to work for you.
Content marketing needs to be about building your visibility and reputation online, and that’s the beginning and end of the story. If you do that well, you will inevitably do better in Google’s and
Bing’s search results. Recall what Matt Cutts said in the interview I did with him in July of 2012.

By doing things that help build your own reputation, you are focusing on the right types of activity. Those are the signals we want to find and value the most anyway.

Successful content marketing programs will use a farmer mentality. Historically, farmers had to look at the big picture. They had to think ahead, plan for water shortages, rotate crops, find ways to store food for long periods of time, and more. Without the big picture, they did not prosper (credit goes to Sean Jackson for the hunter-farmer analogy). [Tweet this]
What are the sites most likely to build your reputation the most? How can you partner with them to create awesome content that really engages relevant audiences? How much traffic can you get through those links you get? Is it going to be received well in social media? Will people engage with it? Will they be more pre-disposed to trust you and want to buy your product? [Tweet this]
Link building is dead. The free money days of SEO are gone. If you made lots of money during those days, sit back for a second, celebrate your good fortune, sigh, and then focus forward on a new future.
This creates a fantastic opportunity for you. A lot of people are not going to get this transition right. You can. You can do it now. Embrace it. Make it yours. Rock on.

Thoughts on “Is Link Building Dead?”