Before I start, let’s discuss why do we need automation?

A very common answer would be to reduce human effort, time and most importantly to do regression testing again and again.

I am working as an Automation tester along with the manual testing team. My task is to create regression test scripts in Selenium and deliver the same to manual team so that they can perform regression testing using automation scripts.

Being an Automation tester I am aware of the framework and technicalities implemented by the Automation team to develop the test scripts. But another fact is, in order to make Manual team execute the same test scripts we cannot setup the same environment in their machine (Imagine there are 50 manual testers).

So our goal is to deliver the scripts wrapped in a framework so that the execution can be made with ease. The solution to the above problem is given by a tool called ‘Apache ANT’.

Using ANT tool along with few prior configurations we can make execution of scripts quite easy.

Before building project with ANT, we need to do below configurations:-

For more details on setup ANT follow the link ” http://ant.apache.org/manual/install.html”

Below is the project hierarchy tree structure to make the understanding proper.

Let’s get to understand how ‘build.xml’ works because this is the heart of ANT tool:- 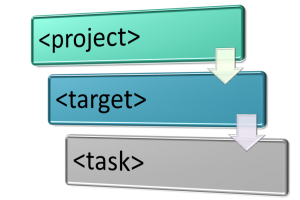 <!– default attribute states that if no target name is mentioned then it will execute ‘init’ target –>

<!– here we will instruct ANT to initialize certain properties as per the framework requirements–>

<!– <junit> and <batchtest> task, this will instruct ant to execute the test scripts in a batch–>

<!– <junitreport> task, this will instruct ant to create a report based on the execution results–>

The command required to execute the project build with ANT is quite simple. 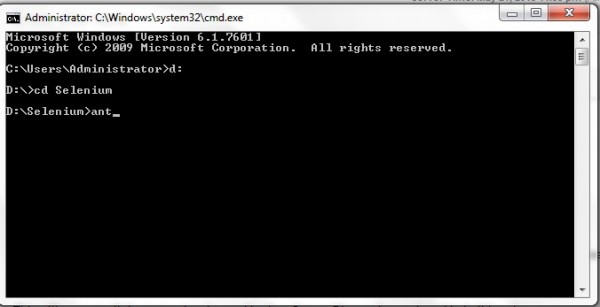 Go to the location of the project directory (“D:\Selenium” in the above screenshot) where build.xml is present.

Either give the command ant or ant <target name> in command prompt.

This will execute all the test scripts located in the <Source Dir> path mentioned in build.xml.

Once the execution is completed successfully, we can verify the results of executed testcases (i.e. % of Passed and % of failed) in the <Reports> path mentioned in build.xml. The report is generated in the html format which Junit by default provides. The Junit sample report is given below.