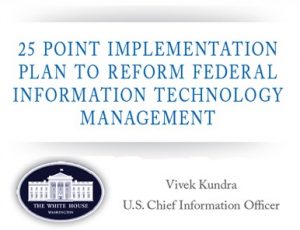 In 2009, President Obama created the new governmental position of Federal Chief Information Officer. As the world’s largest single buyer of IT products and facing ever-increasing fiscal deficits, the United States government was in need of effective, cost-conscious leadership and Vivek Kundra stepped in to take over the role of Federal CIO.

His “cloud-first” policy encouraged government departments to shift to cloud computing, reducing the need to buy certain hardware for every office. He also cut inefficient IT projects and improved transparency with a series of public Web sites, such as usaspending.gov and itdashboard.gov. He has saved the federal government $3 billion overall, according to the Office of Management and Budget.

This success signals enormous support for two powerful trends in information technology. First, the Chief Information Officer for the United States government believes adamantly in the power of cloud computing. Second, through the proper use of technology well-aligned with goals, significant cost savings are possible.
Two years later, Kundra is stepping down to pursue interests in education at Harvard; Steven VanRoekel, managing director of the FCC, will be taking his place. VanRoekel worked at Microsoft for 15 years before moving to the FCC in 2009. His experience at the FCC should prove to be valuable in his new position as Federal CIO.

VanRoekel spearheaded the $1.35 million FCC.gov revamp using crowdsourcing tools, internal blogs and other social media to engage FCC employees during the process. He also tasked the Web site revamping team to visit the FCC call center in Gettysburg, Pa. to learn what types of information people are seeking from the agency. VanRoekel said one of his greatest tasks at the FCC was overcoming cultural inertia and listening to customers, especially the million unique Web site visitors each month.

What does this all mean? The knowledge of commercial information technology experts is moving into the realm of government in a big way. In business terms, VanRoekel’s experience at the FCC involved:

Most importantly though, VanRoekel believes that you should teach your apps to talk. He “strongly advocates use of XML and API to foster collaborative systems.”

“Every piece of data should use XML,” VanRoekel said. “Every access should be an API.”