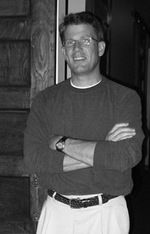 Chris Baggott began his career doing database marketing in the catalog industry. his frustration was that in spite of a terrific insight into customer behavior, he was stuck sending a batch of similar books to everyone regardless of the specifics related to individual data. This led him to co-found ExactTarget the worlds leading Data-driven Email Service Provider. As the company evolved he realized that although Email is perfect for building dialog and relationships with people you already know, it does nothing for acquisition. The number one online activity other than email is search, and this led him to found Compendium Blogware.